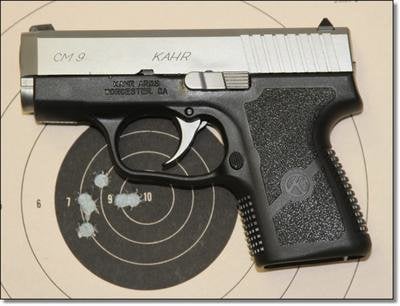 Making a gun cheaper doesn’t always add up to making a cheap gun. That is the point of the new Kahr CM9. Modeled after their extremely popular but pricey PM9, the $569 MSRP clone CM9 has exactly the same external specifications, the same magazine capacity and is the same weight as it’s more expensive older brother.

This gun is how Kahr answers the question, how do you follow up a home run? The answer is “with another home run, $200+ cheaper” and they really have no choice. Coming out of SHOT 2011, where nearly every handgun company announced a new 6+1 tiny 9mm, the PM9 now has much more competition in the marketplace where it had previously ruled the kingdom. The CM9 cuts corners only where the engineers at Kahr felt they could safely be cut, but is more competitive on price with the new entrants into the field in this size range. The CM9 still has the 7 patented features found in all of these small Kahrs, and it shoots exactly like the PM9, recoiling lower in the hand than most guns this size, which drastically reduces felt recoil and muzzle flip. The CM9 differs from the PM9 in 6 different ways.

And that’s it folks. The CM9 is a nearly exact clone of the PM9 at better than $200 cheaper. It has the same last round hold-open that very few small pistols have. It has the same great, always the same trigger pull. And in an ever expanding field of small 9mm pocket pistols, the ergonomics and flip control that you find in these guns is still second to none.

The CM9, like the PM9, is 5.3 inches long and 4 inches tall, but the crucial dimension is the thickness, at only .9 inches thick, or THIN, as Kahr’s marketing campaign is known to say in the ads with the pretty girls. This dimension is in part because both guns have no external safety. The only thing preventing the gun from going bang when you pull the trigger is a long and very smooth trigger pull, similar to a double action revolver, (though I wish you luck finding an out of the box revolver with as nice a pull as the PM9/CM9). Carrying a gun like this in your pocket requires a pocket holster. The pull is long, but easy and smooth, so it does not have the same safety advantages as your run of the mill J-Frame S&W. It takes less training to shoot it accurately, but you have to understand that this comes with safety considerations. In a belt holster you would also want something that completely covers the trigger guard.

Our test gun performed flawlessly and was very accurate as you can see from the pictures. The CM9s are just coming into production (shipping in mid-March), so this was an advance “review gun,” which means it had been checked before we got it, but I’ve seen a lot of review guns over the years and few perform as perfectly as this CM9. I tried everything to try to get it to stovepipe (catch the spent shell in the action as it cycles) and failed, even completely limp-wristing it by firing it with only the web of my hand and index finger.

Pistols are generally considered less reliable than revolvers because most rely on a firm grip on the gun to cycle effectively, and in a gunfight you just never know how you will be holding the gun. You might be fighting off an attacker with one hand while trying to stop his buddy from shooting you from across the room. Having a firm grip on the gun isn’t always a guarantee, so I always test pistols to see if they will fire and cycle effectively with a loose hold. I limp-wristed the CM9 with several factory ball rounds as well as a few combat hollow-points and nothing stopped the gun from cycling reliably, even upside down. I personally have a gunsmith go over every gun I carry, so even if this test CM9 has had a once-over, at least you know that if you buy one and don’t get the same results as I did, the platform itself is capable of reliability worth trusting your life with.

Accuracy is a difficult thing to measure in such a tiny gun. The small sight radius alone makes it almost impossible to test the exact accuracy that the gun is capable of. Tiny differences in angle when lining up the sights on a gun with the sights so close together can cause wide differences in bullet impact on the target. The hold on a tiny gun is also relative to the hand size of the shooter, so just because my hand was capable of controlling the gun in a certain way, your smaller or bigger hand may use different muscles than mine and be easier or more difficult to control for you. I don’t claim to be a prize winning good shot regardless, but on a tiny gun you really have to go shoot it. I predict that the CM9 will instantly become a popular rental gun at the indoor ranges.

Overall the CM9 proved to be more than respectable at 10 yards. It definitely liked the hollow-points better than the round-ball, and the best groups came from Hornady Personal Defense and Remington Golden Saber. With those two the groups ran right around the 1 inch range, and with the round-ball they opened up to about an inch and a half on average. My chronograph battery decided to die on the one day I had this gun, so we’ll have to return for that when the gun comes into production and there are more than a few in the world out here for reviewers.

My only complaint with the gun is that the magazine sticks out a little when full with six rounds. It could just be that this gun is a prototype and the production guns will have better fit. Kahr mags are tumbled so they don’t have any catches on them. That is the kind of attention to detail that you generally see from Kahr. The only other issues you should be aware of are things that are carried forward from the PM9. The trigger reset is long, the same as a revolver pretty much, so you have to let the trigger all the way out before you can pull it again. Fortunately there is a tactile click when this happens, making the gun very intuitive to shoot. And the other issue is true of all but a few striker fired pistols. There is no second strike capability, so if you pull the trigger and the gun doesn’t go boom, you can’t pull the trigger again to see if the primer just needed a second hit. You have to rack the round out and fire the next one. I personally have only owned one gun where this was something that ever happened and the second strike fired the gun, and I as soon as it stopped firing reliably I stopped carrying it (it is an AMT Backup).

The CM9 looks to be yet another home run for Kahr, and I would give it a first look and a last look before buying something else. There are plenty of new tiny 9mm pistols out there, but this is a gun that has been in production and quite a few pockets for many years and has earned a well deserved great, yet expensive, reputation. The same gun at $200 plus cheaper seems like a no-brainer to me.