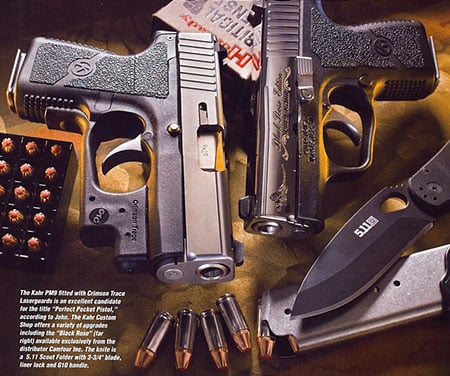 Lightweight and good stopping power has arrived in the Kahr PM9. While it is the same basic pistol as the earlier all-steel K9, the PM9 is better suited for comfortable pocket carry as it is 40-precent lighter and 1/2” shorter, and the grip frame is 1/4” slimmer, and 1/2” shorter. To arrive at the much smaller grip frame it was necessary to cut the flush-fitting magazine by one round, however the PM9 comes with a second magazine with a grip extension and also with an additional 1-round capacity. Carrying the standard magazine for ultimate concealment with the extended magazine stashed on the body gives you 14 rounds of 9mm ammunition carried in a most comfortable fashion.

Let’s take a closer look at the Kahr PM9. Life is full of trade-offs. Scientifically speaking, this equates to, “For every action there is an equal and opposite reaction.” This is certainly true when coming up with the best pocket pistol. Slimming and shortening the grip frame to arrive at the PM9 results in a much different feel than the larger grip frame of the original K9. I also expected the reduction in weight to result in much more felt recoil. The question in my mind was, how would increasing the portability and concealability affect performance?

The Kahr PM9 is fitted with Crimson Trace Laserguard sights, which are easily attached around the triggerguard. By the time you read this, Kahr will be offering the PM9 factory-fitted with the Laserguard unit.

Sights for the PM9 consist of drift adjustable front with white dot and square notch rear with a while a white bar at 6 o’clock.

The Kahr PM9 with Crimson Trace Laserguard sights still has a triggerguard generous enough for use with gloved hands. The use of the laser allows accurate aiming without using a traditional stance.

The Crimson Trace Laserguard is activated by a small button on the front of the triggerguard. The compact unit does not add much to the weight or the bulk of the PM9.

Taffin’s grandson Panzella (above), age 17, likes the fit and feel of the Kahr PM9, here “dry-firing” in John’s study. John fired these groups (below) at the more traditional self-defense distance of 7 yards with the Kahr PM9 using the iron sights.

Hornady offers a new line of self-defense ammunition known as Critical Defense. Two boxes of 115-grain 9mms arrived just in time for me to use with the new Kahr PM9. This little pocket pistol clocks out at 1,001 fps and puts five shots in 1” at yards. I also ran it through the older Kahr K9, Ruger’s new SRC9C Compact and a Browning Hi-Power. It performed flawlessly in all four 9mms and also shot in 1” or less at 7 yards.

To satisfy my curiosity the newer PM9 was run side-by-side with the older K9. Despite dealing with 10 ounces less weight and a shorter sight radius, I could discern little if any significant difference in felt recoil or accuracy. The double-action-only pistols are both relatively easy to shoot as their double action pulls—6-1/2pounds for the PM9 and 8-1/4 pounds for the K9—rival most double action revolvers. My latest S&W .44 Special, an old classic 1950 4” Military, has an exceptionally smooth double action trigger pull and it measures 10 pounds. Considering this, the Kahrs appear truly exceptional.

To shave 40 percent of the weigh from the original all-steel pistol, Kahr has combined a stainless steel slide with a polymer frame. The polymer frame not only allows a significant reduction in weigh, but it also provided a much slimmer profile. The front and back of the grip frame are not serrated in typical fashion. Instead, very small raised rectangles are used to provide a secure gripping surface. This is also carried out by the pebble grain surface on both sides of the grip. The triggerguard is also generous. It allows the largest finger to fit comfortably and also accommodates a gloved hand. The trigger itself is smooth-faced and very easy to reach. This is a double-action-only pistol and, if for some reason it should fail to fire, pulling the trigger a second time accomplishes nothing. The trigger must be reset, by working the slide at least halfway backward.

The stainless steel slide has larger possible grooves in the area behind the extractor to behind the rear sight, which allows for easy manipulation of the slide to chamber a round. There are no sharp edges anywhere on the slide or grip frame. The slide is in fact “melted” on both sides of the top, as well as behind the rear sight and in front of the front sight. The only place on this pistol, which even resembles a sharp edge, is the top of the slanted post front sight and the notch in the rear sight. The sights are excellent providing a large square sight picture with a white dot embedded in the back of the front sight and a white square below the rear notch. They are very easy to pick up and are part of the overall package that make this pistol shoot so well. Both sights are set in a dovetail for ease of windage correction. The sights are pretty much dead on with my eyes and hold with most ammunition selected for testing.

There are no external safeties on the Kahr; in fact, the only controls on the exterior are the slide stop lever and magazine release, both found on the left side. (Other models are available with a thumb safety and/or Tritium night sights.) The slide stop automatically engages when the last round is fired and the magazine releases easily when the button is pushed in. When a loaded magazine is inserted, the slide is pulled back and released to chamber a round; the striker is automatically held under partial tension and is fully secured by a passive striker block until the trigger is fully depressed. As the trigger is pulled, the striker block is released as a protrusion on the cocking cam lifts the striker block so it no longer blocks the striker from moving forward.

The cocking cam also pulls the striker from its partially tensioned conditioned to a fully cocked position under full spring tension. As the trigger pull is completed, the cocking cam releases the striker allowing it to move fully forward, contact the primer and fire the cartridge. The energy from the fired cartridge moves the barrel and slide backward. After approximately 1/2” of rearward movement the camming action of the recoil lug of the barrel and the slide stop/locking pin in the frame pulls the rear of the barrel down to unlock it from the slide. The slide continues fully to the rear, the fired cartridge is pulled out of the chamber by the extractor, and the slide moves forward chambering a round from the magazine. Simultaneously, the barrel moves forward and upwards and locks with the slide. And that’s about as technical as I ever get!

The Kahr PM9 was test-fired with 13 different versions of factory 9mm ammunition in weighs from 90 to 147 grains and in both full metal jacket and hollowpoint forms. The PM9 preformed flawlessly with no hesitation, no stutter and no failure to feed or eject with any of the ammunition tested. Loads were chronographed with the temperature at 35 degrees and then moved indoors for more comfortable shooting. Groups were fired at an “across the room” distance of 7 yards using the iron sights. Results were most gratifying and are found in the accompanying table.

I am a big fan of Crimson Trace. Several of my carry guns are equipped including the lightweight .38 Special always in my jacket pocket. My test gun came with a set of Crimson Trace Laserguard Sights which attach around and in front of the triggerguard on the Kahr PM9. This two-piece laser snaps over the triggerguard and attaches together with two small screws. Both installation and sight-in are very easy. After my initial testing at 7 yards, the Crimson Trace Laserguard was installed for shooting at 25 yards. Using the red light, I was able to keep Black Hills 115-grain JHPs in a 2” group centered in the X- and 10-Ring of a reduced size silhouette target, which is excellent performance from a pocket pistol. Simply put, the Kahr PM9 is Pocket Pistol Perfection.

By the time this goes to press, the factory will offer Crimson Trace Laserguard sights installed on the PM9. To satisfy ATF rules, Kahr will move the serial number to a new location on the frame. Those who already own a PM9, can self-install Crimson Trace Grips without worry.

Life used to be so simple. Whether it was as a backup gun for law enforcement, an easy to carry gun for plainclothes use, or for civilian concealed carry, the choice usually came down to a .38 Special. From Smith & Wesson there was the 5-shot Chef’s Special while Colt offered the Detective Special, which held one more round. As time passed, both companies offered lightweight versions and, in the case of S&W, concealed hammers. For those who proffered semi-automatics, about the only thing available was the Walther PPK, if one could be found. I lusted over Skeeter Skelton’s Walther in those days and never, ever saw one for sale.

Fifteen years ago Justin Moon, of the then newly founded Kahr Arms, began offering pocket pistols with a punch. Instead of just a .38 Special revolver or a .380 semi-automatic, Moon stepped the concept up to 9mm. The first Kahr I had experience with, which I believe was their first product, was the all-steel Kahr K9. I’m not sure why that model designation was chosen; perhaps it was because this little puppy has a serious bite.

Weighing in at 25 ounces, the K9 was a little heavier and larger than the S&W Chief’s Special. However, its 8-round capacity made it especially appealing. In advertising, Colt once claimed an advantage of their Detective Special was it held one more round than the S&W Chief’s Special. But Kahr now had a pocket that exceeded the Chief’s by three rounds and the Colt by two.