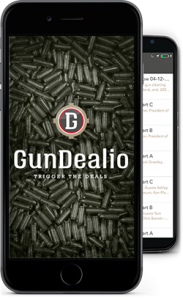 GunDealio.com gives manufacturers and retailers the opportunity to present geo-marketing messages directly to gun enthusiasts while they are shopping at their favorite gun shops. The push notifications will appear on the shopper’s Smartphone, informing them of deals on guns, optics, ammunition, reloading accessories, and more as soon as they walk into the store.

GunDealio was developed by Tom and Ryan Gresham. “We actually started working on GunDealio about 3 years ago as a way to reach gun enthusiasts.” stated Ryan Gresham. “Our idea was to create a way for gun consumers to get the most up-to-date and relevant information, along with manufacturers’ offers and deals while they were still in the store. Shoppers can then scroll the lists of the current deals and new product news in the app as well as receive push notifications to their phones. We are excited to have Kahr Firearms Group as an early sponsor of our program. Consumers are loyal to this brand and now they will be able to get the latest deals and news from Kahr while shopping at their favorite stores.”

The app is free and can be downloaded onto Smartphones from either Apple iTunes or the Google Play Store.