It seems that just about everyone has an interesting “fish” story to share. Recently, Kahr Arms was presented with just such an opportunity and we thought our customers would be interested in this one. Our “fish” story is about a Kahr customer named David Fish.

On February 4, 2012, David Fish, an entertainment executive from Las Vegas, completed an exhausting day at an entertainment conference at the Staples Center in downtown L.A. In spite of the early hour, he decided to head back to his Las Vegas office. It was just after 4:00 a.m. and Mr. Fish was driving his 1999 black Corvette coupe down one of the deadliest highways in America, I-15. He was just about 9 miles into Nevada from the CA/NV border when he came upon another car, swerved to avoid hitting him, lost control of his Corvette, did a 360° spin, and slammed into the guardrail at approximately 60-70 mph. The driver of the car that he had swerved to avoid hitting sped up and left the scene.

David had been ejected from the rear hatch window of his Corvette and had landed 35 feet onto the north side of I-15. He was unconscious and was perilously laying in the fast lane. Another driver coming across the scene, called 911 and an ambulance was dispatched. When the ambulance arrived at the hospital, David was treated for a broken neck (C2 and T1-T5), 3 broken ribs, 24 stitches in the back of his head, broken left leg, 28 staples below the knee that wrap around his left leg, loss of 8 nails between toes and fingers, and a deflated lung. The next few months he endured the pain and swelling, but also healing and physical therapy. Six months later he is sharing his story with us as a survivor. 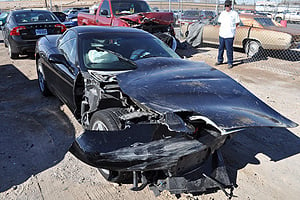 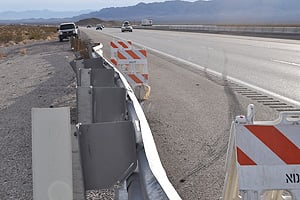 Mr. Fish brought his story to Kahr because he thought we might be interested to hear about another victim of the accident – his Kahr P9 which he had purchased just a few months earlier. Trooper Eric A. Mulkey of the Nevada Highway Patrol Southern Command unit best described what he found at the scene of the accident. Mr. Fish had already been taken to UMC-Vegas by ambulance when Trooper Mulkey arrived at 4:45 a.m.

The Corvette was still melded to the guardrail and was heavily damaged. Debris from the car was strewn across all 3 northbound lanes, the center median and the right shoulder of I-15. As Trooper Mulkey began to mark roadway evidence, he was surprised when he picked up the body of what appeared to be a pistol magazine. As he further marked the roadway, he located the magazine spring and follower, as well as several rounds of unfired 9mm. These components were all located about 65 feet northwest of the Corvette. Trooper Mulkey continued to walk the roadway and located the Kahr P9 in the fast lane, some 170-175 feet from the car. It was no longer in its holster and it was evident by the scratches and gouges that the firearm had been run over by northbound traffic numerous times. When he picked up the gun, he was surprised to find that he was still able to clear the gun and lock the slide.

“As a Lead Firearms Instructor for 14 years, and a Certified Armorer for the Division for 10 years, I was curious about the functionality of the gun,” stated Trooper Mulkey. “I was amazed that the only visible damage was a crack to an internal support within the polymer grip. The slide was still easily manipulated without any binding. The trigger and striker system appeared functional, as well as all the external controls. The condition of the firearm under these extreme circumstances is really a testament to the quality of these pistols. I myself am familiar with the Kahr K40, K9 and the PM9 and I have always been very impressed with their design and accuracy.”

After Trooper Mulkey returned the P9 to its owner, David Fish took the gun out to the gun range to test fire it. Mr. Fish reported, “After replacing the broken clip, even with the grip cracked, I found the P9 shot remarkably well.” He then shipped it back to Kahr Arms to be repaired.

When Kahr received the P9, the only damage was an internal supporting member on the inside of the grip. The frame was replaced on the gun but the top half of the P9 was not damaged.

We provide this update on Mr. Fish. His surgeons have told him that the surgery he was scheduled for to fuse his C-2 and C-3, followed by months of wearing a halo has been canceled indefinitely. He is healing well and his pain is diminishing. As for the P9, it is now back in the hands of its original owner.

We give a special thanks to Mr. Fish and Trooper Mulkey for sharing this harrowing experience with Kahr. 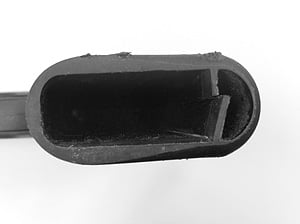 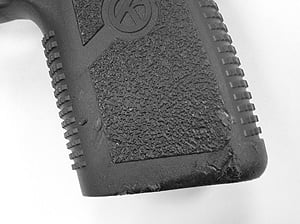 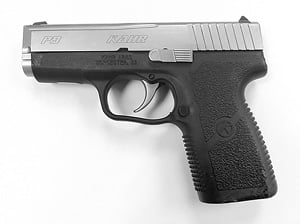 The P9 was run over numerous times by large tractor trailers and the only damage was to the internal support in the magazine well.
The gun cycled and functioned perfectly except the magazine would not release due to the damaged internal support, there was no internal damage to the slide or the barrel.