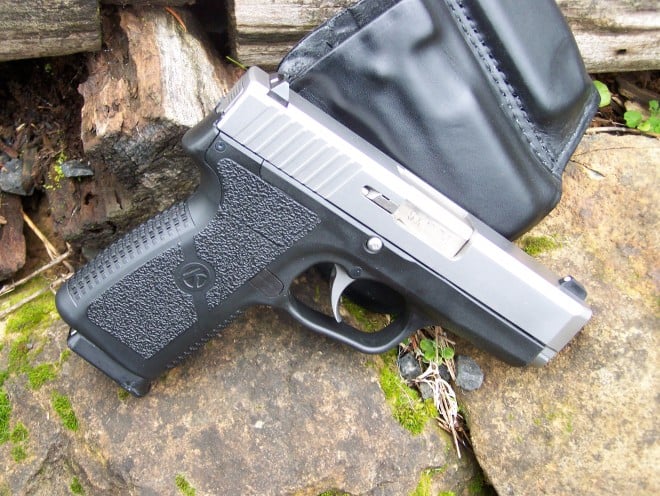 I purchased my first Kahr Arms handgun about 8-yrs ago. I’d read in the gun rags about how nice these pistols were and what a great double action only trigger pull they had, but I honestly didn’t believe all the hype. That is, until I saw my first Kahr pistol. As soon as I handled it and pulled that buttery smooth double action trigger, it was sold! Since then, I’ve owned quite a few Kahr handguns, and they make a lot of different versions of the same gun, so they have an extensive line-up of handguns.

My family knows of my passion for Kahr handguns, and whenever I get a press release on a new model, I request one for testing and for an article. One of the Kahr handguns I never got around to ordering for myself personally is their CW9. The CW line is Kahr’s “economy” line-up for handguns. They only come with one magazine, the sights are polymer, and there are a few other aspects that bring the price point down from some of their premium handguns. My wife and two daughters all chipped in this last Christmas and bought me a CW9 of my own.

The CW9 is chambered in 9mm, and it holds 7+1 rounds of ammo (7 in the mag plus 1 in the chamber). Barrel length is slightly more than 3.5-inches, and overall length is a mere 5.9-inches, with a height of only 4.9 inches. The slide is brushed stainless steel, and the frame is black polymer with checkering all the right places for a sure grip on the gun.

Empty, the gun only weighs 15.8-ozs. Slide width is a mere .90 inches. Sights are white bar/dot combo, and the rear is drift adjustable for windage. However, I’ve yet to have to adjust the rear sight on any Kahrpistol I’ve owned. They are dead-on from the box. The only control on the gun is the slide release. Other than that, the gun is clean of any other levers, other than the magazine release button.

The trigger pull on the CW9 is a bit long, but VERY smooth, and not heavy. As I pointed out at the onset of this article, their guns are well-known for their buttery smooth trigger pull. And, to be sure, it takes a little bit to get used to the double action only trigger pull.

The one “bad” thing about the CW line-up is that they do only come with one magazine, and I’m a firm believer that you should always carry a spare magazine with any semiauto pistol you decide to carry. Many times, if you do have a malfunction, it is more likely to be a bad magazine, and if you only have the magazine in your handgun, you are up the creek without a paddle. So, a second magazine is always in order. And to be sure, Kahr has some of the best made magazines I’ve ever run across. The only “bad” thing is they all come with a stout magazine spring, and they are a bit hard to load. On the other hand, that stout magazine spring really pushes those rounds up there, ready to be chambered.

Kahr spells out in their owner’s manuals that you should fire at least 200-rds of ammo through their gunsbefore you fully trust them for self-defense, and this is just good ol’ common sense when it comes to any semiauto handgun. Many need a break-in period. Of course, I’ve yet to run across a Kahr that actually needed any break-in period. Cleaned and lubed out of the box, and they all ran great, no problems.

Not many firearms makers will specifically say you can use +P ammo in their handguns, however, Kahrstates that you can. Just be advised that the use of +P ammo, especially in small handguns like the Kahrline, will increase wear and tear. Use standard velocity loads for target practice with a limited number of +P loads during practice, and then carry +P loads for self-defense. Note that with these small handguns, you will definitely notice the added recoil when shooting +P loads. If +P loads recoil too much for you, then you can carry standard velocity JHP loads.

Now, with the above warning about +P loads, there aren’t any gun makers that I’m aware of that state you can or should +P+ loads in their guns. Some +P+ loads are actually hotter than pressure test loads are. And many small handguns won’t function with +P+ loads. The slide is just moving back and forth so fast, the magazine spring can’t get the next round up there fast enough to feed into the chamber. I haven’t found very many sub-compact pistols that will reliably function with +P+ loads. However, my CW9 was tested with some Buffalo Bore +P+ Barnes TAC-XP 115-gr loads, three mags to be exact, and there weren’t any problems at all with this little gun other than recoil was very hard. It recoiled more than another handgun I was testing with +P .45ACP loads–ouch!

I ran more than 300-rds through my little Kahr CW9. From Black Hills Ammunition, I had their 115-gr JHP+P, 124-gr JHP +P, and their 115-gr FMJ. From Buffalo Bore Ammuniton, I had the above +P+ Barnes load, as well as their 147-gr FMJ FN and 147-gr JHP both sub-sonic loads. I had zero malfunctions during my testing with any of the loads I ran through the gun.

I did my accuracy testing at only 15-yards since this is a sub compact self-defense pistol. The gun was fired off-hand; no rest was used. Most groups were under 4-inches, and some fell into 3-inches if I did my part, which wasn’t all the time, unfortunately. The overall winner in the accuracy test was the Buffalo Bore147-gr FMJ FN round. For self-defense purposes, I’d elect the Black Hills 115-gr JHP +P load. It was pretty easy to handle and will get the job done.

I’ve been carrying my CW9 off and on in a Blackhawk Products CQC Leather holster with a mag pouch at part of the holster. It’s a nice set-up as it affords me a holster that keeps the CW9 high and close to my body, and I can carry a spare 7-round mag right on the holster instead of in a separate mag pouch on my belt.

These days, with mass shootings and the constant threat of terrorist acts being carried out, a lot of folks are carrying handguns that hold a whole lot of rounds in the mags, and I do the same, on occasion. However, if I’m just running to town to the grocery store, I don’t mind packing my CW9 with a spare magon my belt in the least. Now, I wish I had a crystal ball and could predict when and where or what kind of attack may come my way. If I knew that, I’d sling my AR-15 and head out with that. But life is full of compromises, so we live life accordingly. If I’m heading to a larger city or going to a mall, I’ll carry something more than my CW9, just in case. I live in a very rural area, and the threat level where I live is next to nothing–ditto for the two small towns that are near me. So I don’t feel I have to strap on body armorand a hi-cap handgun with half a dozen spare mags every time I leave the house.

The CW9 will take care of your everyday self-defense needs if you place all your shots where they need to be, and just in case, you do have that spare mag with you. Remember, you aren’t the military or the police, and you aren’t going out intentionally engaging bad guys in a drawn out gun fight. You are carrying a handgun for self-defense, and if things get “that” bad, you need to look for an exit instead of wishing you had your AR with you.

Full retail on the CW9 is $449.00, and you can usually find them quite a bit cheaper if you shop around. What’s not to like about a very small and highly concealable handgun that can handle +P ammo and is totally reliable?