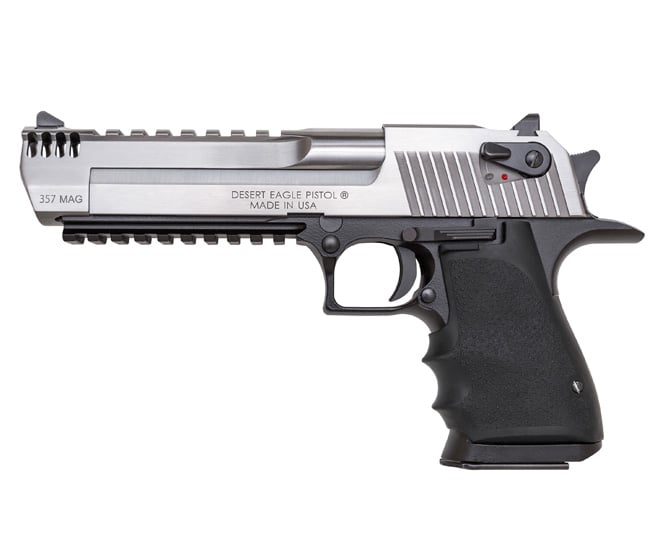 The new L5 is offered with a 5” barrel, and features a hard-coat anodized black aluminum frame, black carbon steel slide and barrel, and Hogue finger groove rubber grips. The pistol also has Magnum Research’s widely popular integral muzzle brake. The new lighter version of this popular Desert Eagle .44 Mag puts it under 50 oz. which also makes it New York State compliant. Overall length is 9.75”, height is 6.25” and the slide width is 1.25”. The DE44L5IMB ships with one 8-round magazine and suggested MSRP is $1,790.

Also new for 2017, Magnum Research now offers the aluminum frame L6 with stainless slide and barrel both in a .44 Mag and a .357 Mag in addition to the popular .50 AE which was also introduced in 2015.

Both the Desert Eagle L6 DE357ASIMB and the L6 DE44ASIMB feature a 6-inch stainless steel barrel and slide with a hard-coat anodized black aluminum frame with a stainless steel slide and integral muzzle brake. It also has attractive black appointments and features a picatinny rail on the frame. And like the L5, the new L6 also features a Hogue finger groove rubber grip. Overall length is 10.75”, height is 6.25”, and the slide width is 1.25”. The single action pistol has a 4-pound trigger pull. The L6 ships with one 8-round magazine for the DE44ASIMB and a 9-round magazine on the DE357ASIMB. The MSRP for both models is $2,054 each.

For the very first time, these 4 models now offer white 3-dot sights, a Pachmayr® Tactical Grip Glove, and a Pearce finger rest magazine extension. The CM4543 does not include the Pearce Finger Rest. These 4 models will be offered in Cerakote® Tungsten on the slide, trigger and slide stop lever. This new finish has been very popular for Kahr Firearms Group, and with the added features, on even more calibers, this is a great value for shooting enthusiasts. MSRP is $439 for the CW3833TU3 and the CT3833TU3. The MSRP on the CM9093TU3 and the CM4543TU3 is $499.