Compact used to be the definition for a small handgun. Now we have subcompact, ultra-compact and micro-compact. And then we have the new Kahr CM9, a little more than .380 ACP-sized pistol that carries 6+1 rounds of 9mm in a package small enough to unobtrusively conceal in a pocket holster or almost totally disappear tucked into an IWB rig aft of your hip. Overlay the competition; it is slightly smaller than the Ruger 9mm LC9, slightly larger than the Ruger .380 LCP, and with a weight differential that is almost negligible at less than 16 ounces. The Kahr CM9 in its two-tone, polymer and steel build arguably lacks “elegance,” but there is obvious charm to its utilitarian approach to design. In a sense, its simplicity is the source of its beauty. At its core, it is a trim, semi-automatic pistol that delivers a lot for a comparatively reasonable suggested retail price of $517, with the CM9 being a more cost-conscious variant of the PM9 series of pistols from Kahr (while still maintaining the brand’s excellent quality). 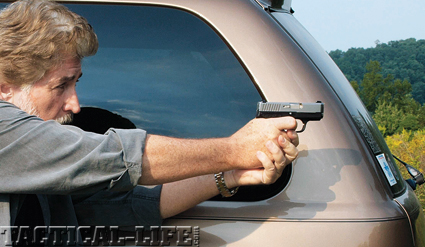 The author puts the CM9 through a vehicle barricade drill, drawing the pistol with ease. It proved to be a highly capable compact pistol that was a pleasure to carry.

Gun Details
Peel back the layers of what defines an ultra- or micro-compact 9mm and you will always find three fundamental characteristics: small size, light weight, and good capacity. The CM9 has everything you want, and that means as little as possible. This is the KISS (keep it simple, stupid) poster gun. Based on the earlier PM9, the CM9 is a lower-priced variation with conventional rifling rather than the more costly Lothar Walther polygonal match grade barrel used in the PM9; it comes with one six-round magazine and is offered only in a two-tone finish with a 416 stainless steel slide, black polymer frame featuring molded-in front and backstrap serrations, textured grip panels and single magazine release. A traditional trigger cocking double-action-only (DAO) design using a Browning-style locked breech, the CM9 is a simple and straightforward pistol. No external safety and no magazine disconnect, so it will fire a chambered round with the magazine removed. Standard is a drift-adjustable dovetailed white bar-dot rear sight with matching fixed white dot front.

In terms of basic design the CM9 is more akin to Kahr’s CW series, which have 3.6-inch barrels and 7+1 capacity in 9mm (there are .40 S&W and .45 ACP versions in both the CW and PM lines), making this the first lower-priced Kahr polymer frame ultra compact with a 3-inch barrel. Like the PM9, the overall length for the CM9 is a modest 5.42 inches, height 4.0 inches, a skimpy 0.90 inches in width, and weight is a mere 15.9 ounces. The significant difference between the PM9 and CM9 really comes down to finish options and the Lothar Walther match barrel. 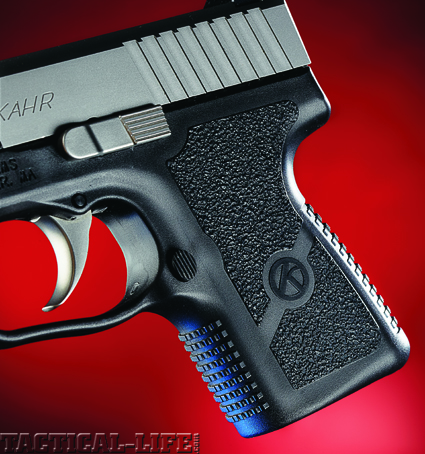 Controls of the Kahr CM9 are simple, made up of a slide release lever, a magazine release button and the double-action-only trigger. 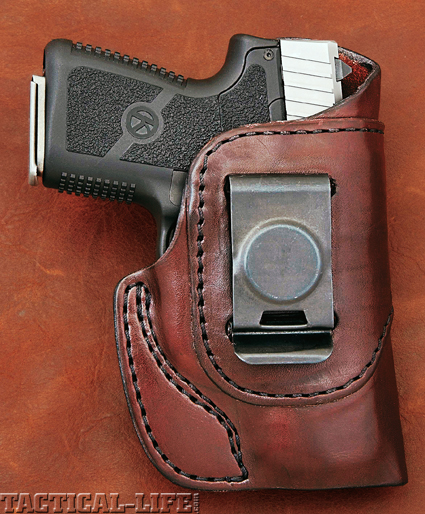 One of Kahr’s recommended holster options for the CM9 is the Mitch Rosen IWB, featuring double-stitching and a heavy-duty spring steel belt clip.

Holsters abound for the PM9 and the CM9, but one of Kahr’s recommended holster is the IWB rig ($65) made by Mitch Rosen that is contoured to the PM/CM configuration. This is a handsome looking holster with double stitching, a thick, gusseted pouch, heavy-duty spring steel belt clip, and finished in a distinctive “Cuban Brown” color. The Mitch Rosen CLP (part of Rosen’s exclusive Express Line), is a solid holster that keeps the Kahr firmly in place and mostly out of sight until needed. The outside is cut down to allow easy purchase of the grips, while the inside has a high rise back panel that provides a buffer between the gun and body. This also prevents the Kahr from digging into your side and helps with re-holstering by forcing the muzzle into the pouch; my brother-in-law called it a “Kahr Port.” He might be on to something there! The high-rise back panel also shields the gun from perspiration making this an ideal holster to wear against skin with nothing more than an open shirt for cover.

I tested the Mitch Rosen/Kahr combo sitting, standing and driving and in every instance it maintained the gun’s position, ease of draw, proved easy to re-holster, and most important of all, was comfortable to wear.

Range Time
For accuracy evaluation, a Speedwell B-27 silhouette target was set up at a measured distance of 21 feet (7 yards) and all shots were fired using a two-handed hold and Weaver stance. Test ammo included heavy-hitting Federal Premium Law Enforcement 124-grain Hydra-Shok JHP, Hornady 115-grain FTX, and CorBon 115-grain DPX. All three are highly recommended defensive loads. The average velocities from the Kahr’s 3-inch barrel were 960 fps (feet per second at the muzzle) for the Federal premium, 990 fps for the Hornady, and 1,110 fps for CorBon.

The CM9 uses Kahr’s patented trigger cocking cam system to unlock the firing pin block (integral passive safety) and complete cocking and releasing of the firing pin in one smooth motion. Trigger pull is lighter than one expects from a DAO with less tension (stacking) than other striker-fired semi-autos in this size and weight class. Pull on the test gun averaged a crisp 5.4 pounds with 0.625 inches of take up, zero overtravel and quick reset, making the Kahr CM9 tone of the easiest to shoot DAO pocket pistols in my opinion.

Recoil with all 9mm loads was moderate, with the fast traveling CorBon delivering the harshest kick. I found target acquisition using the white bar-dot combat sights a little slower than more traditional three-dot white sights, although that is more of a personal preference than an issue with the CM9. The gun tended to fire 1.5 to 2.0 inches left of point of aim and I compensated rather than making an adjustment to the rear dovetailed sight. The only real issue with the Kahr is the magazine release which is very small, and the magazine itself, which failed to drop freely from the gun about two-thirds of the time. As the CM9 only comes with one magazine there was nothing with which to compare it. On the plus side the CM9 has deep, angled slide serrations that make chambering the first round or clearing the gun easily managed, and a distinctly large and easily activated slide release; two very important features for an ultra compact semi-auto. 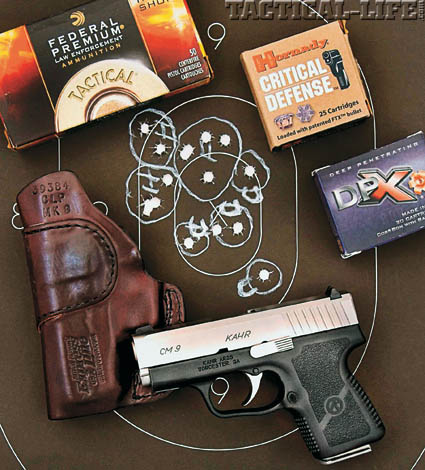 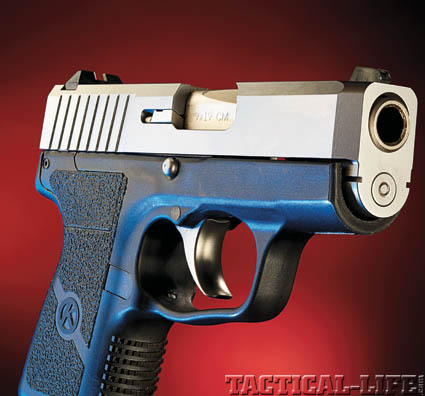 The ultra-compact CM9 features a simple and instinctive double-action-only system of trigger operation. The trigger broke crisply at 5.4 pounds.

One would expect field stripping the CM9 to be a quick process and it sounds simple enough in the instruction book, but requires strong hands and extraordinary dexterity to hold the slide back while tapping out the slide stop. The tension of the double recoil spring and tight fit of the slide stop make this a tricky procedure. Disassembly begins with removing the magazine and clearing the chamber. The slide is then drawn back to align the slide stop with the frame cutout, at which point you push or tap the slide stop through and remove it. Ease the slide forward, pull and hold the trigger, then draw the slide forward off the frame. The recoil spring guide rod assembly and barrel are easily removed. Reassembly has one caveat; the smaller end of the recoil spring must face the front of the guide rod (flared end) and it is essential to assure the alignment of the guide rod. Follow the reverse order for assembly and the Kahr is back together easier than it comes apart.

Accuracy with the CM9 was excellent with shots fired at one-second intervals from a distance of 7 yards. Best groups measured 1.0 inch for Federal Premium, 1.75 inches for Hornady, and a slightly wider 1.95 inches for the heavy recoil CorBon. 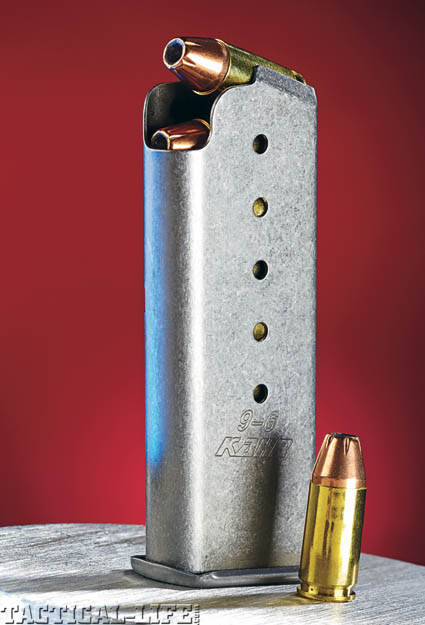 The pistol comes with a single, flush-fitting magazine that holds six rounds of 9mm. It is constructed from stainless steel.

Final Thoughts
With every shot under 2.0 inches, and every one inside the 10 and X center mass of a B-27 silhouette target, it is safe to say that the smooth-shooting CM9 can certainly get the job done in close-quarter combat situations.

Combined with the excellent Mitch Rosen IWB rig this is a very dependable concealed carry handgun—all at a price that puts quality, accuracy, and ease of use within reach of a great majority of individuals.